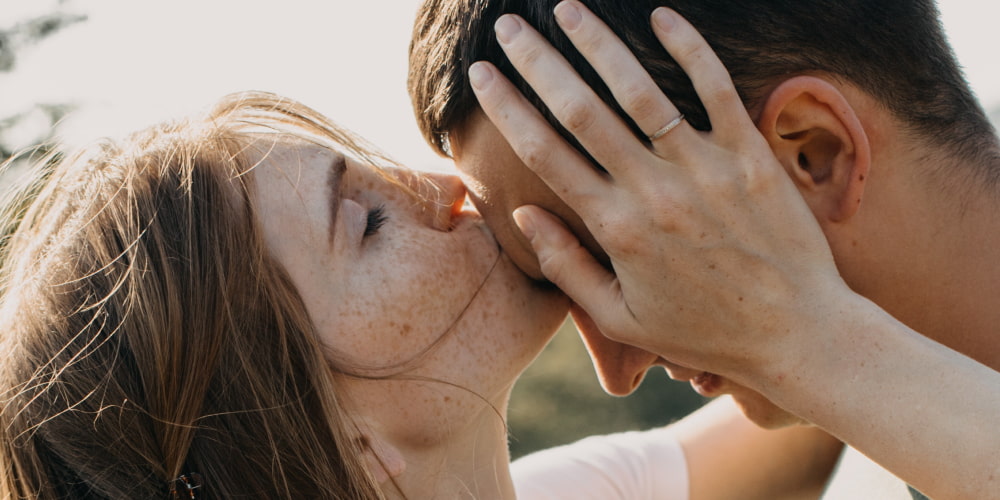 When, two months into her relationship with Jim*, Pam* realized that things were not progressing physically as she would have liked, she didn’t want to give in. Instead, she did some research and they agreed to give Blueheart a go.

We talked to Pam about her experiences with the app and why she and Jim both joke that Blueheart should be mandatory for all couples.

“I met Jim on Hinge. We were both in our mid-30s and we hit it off immediately. But just a couple of months in I began to realize something wasn’t quite right. We were enjoying one another’s company, but things just weren’t progressing sexually for us. I felt worried and confused. I considered ending the relationship but decided first to talk to Jim about what was going on. Gradually Jim opened up to me. He said he had been seeing a therapist to help him with general anxiety and during his time with her he had discussed sexual anxiety. He admitted to me that he had never had sex. By this time, we were about six months into our romantic relationship and I really liked this guy. I could see a future and decided I wanted to support him with the problem rather than run away."

"The concept of the app looked fun and engaging. It seemed to be a great option between couples therapy and sex therapy. We could do it from home in a low-pressure environment and the price was too good to be true. In fact, it was so cheap compared to regular therapy that I even stopped to consider whether it was a scam. I would have definitely paid more!

"Once I had done a bit of research, I suggested the idea of sex therapy via Blueheart. Jim was on the fence but agreed to give it a go. So I paid for the six-month plan.

Working out what they both wanted

“We agreed early on that having a good sexual relationship was the key to a healthy relationship in general. But Blueheart helped us consider questions to understand what that looked like to us. Did we mean penetration? Being together or touching? What does a ‘good sexual relationship’ mean? I also felt I wanted to build closeness in general. I wasn’t really sure how Jim felt about me emotionally. The talk session questions helped us both to open up and allowed him to figure that out.

“For his part, Jim wanted a path to having a sexual relationship, because he didn’t want to be a 35-year-old virgin.

“I spent some time looking around the app, trying to figure out exactly what to expect from Blueheart. I had seen the video on the website, but wanted more specifics about the length of time in which we could expect to see results and how often we should need to do it etc?

“I quickly converted from trial to subscription and shared the link with Jim. He wanted to discuss the idea with his therapist so shared the app and, once she had approved it, he accepted the link. I guess it took a few weeks overall from seeing the ad to our first session as a couple.

“The first two months were hard. The talk sessions brought us closer together, but the touch sessions were hard on my boyfriend because of his sexual anxiety. He would often look for an excuse not to do a session. We then agreed on a level that he felt comfortable with each week.

“By months four and five, we started to see positive changes in our sex lives and were learning more about effective communication. We did not always see improvements week over week, but overall things were trending upwards. Our relationship issues were gradually improving.

Reflecting on the sessions

“Overall, we really enjoyed the Learn sessions and the ‘most valuable lessons’ part of the reflections. We thought Shiv’s voice was perfect for the mantra of temperature, pressure and texture. The app offered us the flexibility to choose how it worked for us. We actually settled on only doing one of the three recommended Touch sessions per week. This was partly because we don’t live together and three per week was too much. It was also because we didn’t enjoy the repetition.

“We went through a lot of difficult conversations but the talk sessions on Blueheart gave us a good foundation on how to discuss difficult topics with each other. And how to improve our communication skills in general. Sometimes the Talk questions felt quite similar to each other within the same session. I offered feedback that being able to scroll through all the session’s questions to get a sense of how they fit together overall would be beneficial.

“My favorite thing, and I think Jim’s as well, was the tracking, comparing our star plots and discussing how we felt about one another. I really liked the articles – they were fun, informative, and well-researched. And we both enjoyed the encouragement to journal our thoughts. We chose to do it differently – I wrote longform and Jim opted for bullets. It was only at the end of the sessions that we did this as we have our own physical journals too, but I still look back at what I wrote sometimes to remind myself what I learned.

“We recently finished our six-month trial and have benefited significantly. We are currently talking about the next steps in our relationship which is very exciting!

“I think some of the most powerful things I took away from Blueheart were the importance of deep breaths and the mantra of pressure, temperature and texture. We now make time for this type of touch every week and it is really important to us.

“We realize we had a bad impression of what sex should be from films and learned that it’s good to have some time to warm up. We now sit naked and breathe first, touch each other’s arms and legs but not genitals. We’ll then move towards genitals and sex.

“The most valuable thing that Blueheart did for us was to change our understanding of sex in intimate relationships and what it can be. This was a good alternative to couples counseling or relationship therapy for us.”

Try Blueheart for Free
Blueheart's app has taken people from 'will we break up?' to 'we will work through this together'. Take the free assessment to find out what you can do to make a change.
Take assessment